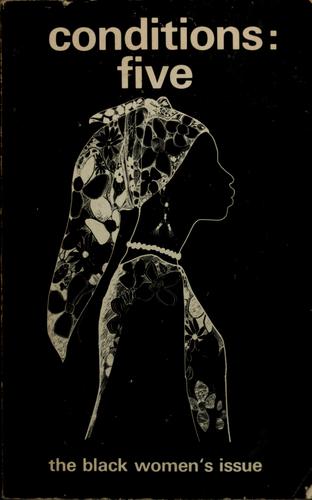 Lorraine Bethel "WHAT CHOU MEAN "WE", WHITE GIRL?
OR, THE CULLUD LESBIAN FEMINIST DECLARATION OF INDEPENDENCE
(DEDICATED TO THE PROPOSITION THAT ALL WOMEN ARE NOT EQUAL, I.E. IDENTICAL/LY OPPRESSED)"
Preface:
I bought a sweater at a yard sale from a white-skinned (as opposed to Anglo-Saxon) woman. When wearing it I am struck by the smell — it reeks of a soft, privileged life without stress, sweat, or struggle. When wearing it I often think to myself: "this sweater smells of a comfort, a way of being in the world I have never known in my life, and never will." It’s the same feeling I experience walking through Bonwit Teller's and seeing white-skinned women buying trinkets that cost enough to support the elderly Black woman elevator operator, who stands on her feet all day taking them up and down, for the rest of her life. It is moments/infinities of conscious pain like these that make me want to cry/kill/roll my eyes suck my teeth hand on my hip scream at so-called radical white lesbian/feminist(s)
“WHAT CHOU MEAN "WE", WHITE GIRL?"

*****
Ain’t they got no shame?
Naw, they ain’t, I thought for the ninetieth time in as many days
as she asked me long distance from California to pay my way
to Indiana, Arkansas,
or some other Black goddess forsaken place to be on a panel
a set up
THE BLACK/LESBIAN/FEMINIST/CRITIC
because _they_ want to represent Third-World women and lesbians
on _their_ feminist criticism panel
and I'm _such_ a convenient package.
I knew it was coming when she said "You don’t know me,
but I got your name from ...”
They never know us,
selecting their victims from a rollodex labeled feminists, Black
or lesbians, Black
or better still, lesbian feminists. Black
a list I’m convinced some white girl is selling
and has made enough money from
to retire with a Swiss bank account
an index of Black women, feminists, lesbians
literate ones who don’t eat white women or bite their heads off
or say "That’s irrelevant to my struggle as a Black woman,"
or “The women’s movement is a white girl trip.”
or “Are you a bull dyke?” or “Get out of my face, bitch!”
when feminism is mentioned to them.
It is a list that entitles its members to junk conversations and calls
at any hour of the day or night: “Would you, could you, we're having
a women's conference,
meeting, caucus, workshop, business, magazine, party, _______*, revolution
and we’d really like some Third World women to be there.
Don't come as you are,
but as we’d like you to be: our worst fantasy/primal nightmare, our best dream.
Something like Flo Kennedy or Pat Parker is what we had in mind.
It’s not a costume affair,
but you get to be THE BLACK/THIRD WORLD/FEMINIST/LESBIAN/
WOMAN.
We’ll try not to think you’re politically incorrect, straight, or bourgeois
because you look decent.
Bring your own food because you won’t be able to eat ours.
There probably won’t be any. We know food is _real_ important to you people.
For sure. And, naturally, we can’t pay you for your services
because we’re struggling revolutionaries
(don’t mind our Volvo's, country houses, town apartments, health centers,
stores, magazines, universities — they’re part of the revolution.)
Would you mind sharing with us what it’s like to be a Black woman/
Third World lesbian/
feminist/activist/writer/artist/revolutionary in twenty minutes or less?
That’s all we have time for.
Yes, I/we do mind.
Maybe it wouldn’t be so bad if you could make a living from it,
or even pocket change.
Print up cards:
Tired of people asking why there weren't any Third World women at that event?
Local Black woman available to be representative token Black feminist/lesbian
(for greater profit one must play the white straight feminist and lesbian circuits)
at parties (You don't want your friends to think you don’t know any
Third World women.
So politically incorrect.) meetings, marches, and relationships
(after dinner dates
and escorts time and 1/2 overtime). Tax deductible.
Liven up that dull study group with real life adventures of Black women!
See what it’s like to be doubly or triply oppressed (depending on the circuit).
Discounts available for standing engagements, long term sexual relationships,
friendships,
and annual gatherings.
I am so tired of talking to others
translating my life for the deaf, the blind,
the “I really want to know what your life is like without giving up
any of my privileges
to live it” white women
the “I want to live my white life with Third World women’s style ah
keep my skin/class
privileges” dykes
So this is an open letter to movement white girls:
Dear Ms Ann Glad Cosmic Womoon,
We’re not doing that kind of work anymore
educating white women
teaching Colored Herstory 101
on the job, off the job, in bed
in bed
letting lesbian/feminist racial transvestites
radical chic European dykes wearing pouches and multiple earrings
with no libations for Black female spirits
pick our brains steal our culture, style, identities
for free or below the minimum wage (for the revolution, of course)
while we wonder where the next meal, job, payment on our college loans
and other bills,
apartment, the _first_ car, Black woman-identified bookstore, health center,
magazine,
archives, bar, record company, newspaper, press, forty acres and a mule
or national conference
are going to come from.
They will come
from us loving/speaking  to our Black/Third World sisters, not at white women
They will come
from us taking the Black woman energy presently being used to legitimize
your movement
and fighting to create and maintain our own Black women’s culture,
our own Black feminist movement,
our own Third World lesbian nation.
They will come
from our strength, our fatigue and anger at always being misunderstood,
overworked,
undervalued part of someone else’s program. For free.

They will come
when we separate the Third World woman-identified Third World women
from the white woman-idehrified Third World women
when we Black woman-identified Black women leave the
white woman-identified Black women
those who can’t come to their Black female senses
who won’t deal with real sista love
way behind
you know the ones
who don’t really like themselves or other Black women
the ones who’ve accepted and glorify in myth roles
Black bull dyke stud or Black lesbianfeministgoddesstokenstar
of the white women’s community
modern day political and apolitical minstrels in colored girl face
The radical Black ones who insist that “the personal is political”
applies to everything
except their succession of white woman lovers or their lifetime one
We will leave them
in the fitting company of those white women
who maintain that the counter-revolutionary political incorrectness
of an oppressed group
(like women) giving their vital energy to their oppressors (like men)
applies to everyone
except the never ending succession of Third World woman lovers/friends
giving their vital energy to white women like them
Can I get a witness
to testify about the ones with a jones for Black pussy
who would be scorned as racist dogs if they were heterosexual white men
instead of white lesbians hiding behind the liberal veneer of
equal bedroom opportunity
erotic affirmative action
when actually they are the reverse racists
another white dyke doesn't stand a change of qualifying under
their sexual guidelines
The ones who haven’t done much of anything for Black liberation
since the 60’s
except giving up Black men to sleep with Black women
Not much of a sacrifice considering the men they chose.
The white girls who play ethnic upswomanship
speak Spanish more fluently than native Hispanic women
are well versed in Black female english and dances
dress dyke chic and curl or wrap their hair get deep tans in the summer
all to better attract Third World lesbians with paler versions of ourselves
Our Third World lesbian spaces will come
from those of us who are remembering in increasing numbers
that imitation versions don't make it
(like choosing androgynous boys instead of handsome women)
or as Aretha pointed out:
"Ain't nothin like the real thang"
real Black women loving real Black women
real Third World sista love between real Third World sistas
They will come
from conferences like the one I'm on my way to now
Black lesbian writers
Third World women artists from all over
meeting, joining forces, sharing sista energy
speaking to our own experiences and sensibility
without having to explain anything to each other
because we are each other's lives and words**.
They will come
from Third World women's spaces I've been a part or
places where dozens of us make Black female communities
plan our movement
strategize about the oppression of Black people Black women
Black lesbian feminists
greasin for days havin passionate affairs with each otha
bein loud, rowde and our natural cullud selves
be lovin ourselves be for real
be praisin the BLACK GODDESS
be making revolution for us
be gettin a taste of Black dyke heaven
be wantin needin a steady diet of it
be plannin to have it
When I asked her for money she said
"We're not the M.L.A."***
I thought
"Black women/lesbians/feminists don't even have a M.L.A to _not_ be/
We will
Have each otha's sista love/work/selves
All the time
Beginning here

*Third World women may fill in the latest white women's activity they have been invited to legitimize.
** This poem was written while I was travelling to the first annual Third World Lesbian Writers conference, 24 February, 1979, New York City, N.Y.
*** The Modern Language Association, the oldest national professional organization for college English teachers.